Cammi Granato Ferraro is an Olympian and former member of the US Women’s Ice Hockey team. She attended college at Providence College where she played hockey and went on to play at Concordia University in Montreal as well. She continued her playing career with Team USA and captained the team for twelve years. In 1998, she was able to help lead the US to win their first gold medal at the first Olympics Women’s Ice Hockey was included. In 2002, Cammi won silver at the Winter Olympics in Salt Lake City. After her playing career, she received her Graduate Degree in Holistic Nutrition, worked in broadcasting for the NHL and the Olympics.

Cammi holds a list of firsts as the first woman inducted into the IIHF, the Hockey Hall of Fame and became the first ever female pro scout in the NHL when she was hired by the Seattle Kraken in 2019. She has two sons and two step sons and resides in Vancouver while working for the Kraken. 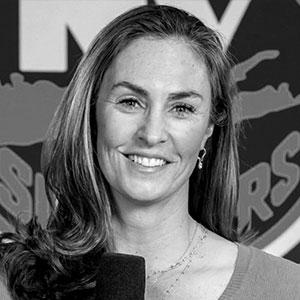 A member of the US Hockey Hall of Fame, Mleczko helped Team USA win the first-ever gold medal awarded in women’s hockey at the 1998 Winter Olympic Games in Nagano, and four years later the silver medal at the Salt Lake City Winter Olympics. In 2018, Mleczko made broadcasting history when she became the first woman to work as an in-booth analyst for an NHL postseason game, and was a member of NBC Sports’ NHL coverage team, including on the Stanley Cup Playoffs. She has also been an analyst from both the studio and in between the benches on MSG Network’s New York Islanders telecasts since 2018.

Mleczko played collegiate hockey at Harvard University, helping lead the Crimson to the 1999 Division I Women’s National Championship, and eventually becoming a member of Harvard’s Hall of Fame. The 1999 season also saw Mleczko set the NCAA single-season scoring record and win the Patty Kazmaier Memorial Award for being the top female college ice hockey player in the United States, in addition to winning USA Hockey’s Bob Johnson Award as Player of the Year.

Mleczko has worked as an analyst for NBC Sports’ hockey coverage since 2006, covering four Winter Olympic Games during that span. She also served as NBC’s field hockey analyst for the 2016 and 2020 Summer Olympics.